Heart of the Country of Light: Patara

Beach that reaches beyond an eye’s reach may remind you of a lovely summer holiday. But beneath Turkey’s longest beach lies the “Sleeping Beauty”: Patara. Every structure in the ancient city is a stone letter from the past. 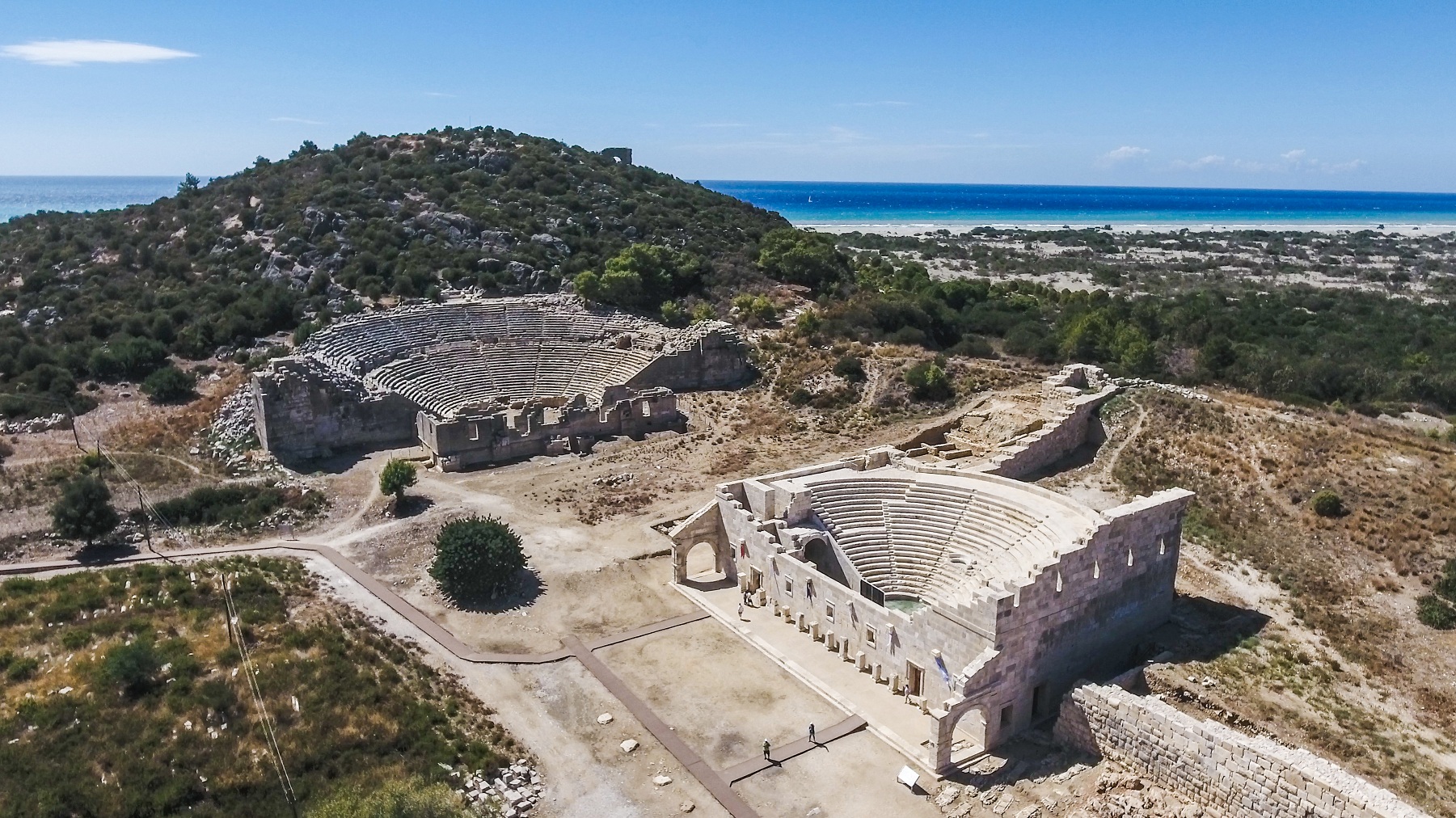 “On the 9th day of the month we arrived at Patara from Kalamaki and walked towards the ruins without stopping. Sun was scorching and it was difficult to find a solid ground to step on. The ruins were circled with slippery dunes and thorns reaching the heights of my shoulders. The quagmire fed by the streams had swallowed the ruins. I glanced at what we were able to reach and was only able to draw the plan of the theatre; it was the best I had ever seen…”

The French archeologist Charles Texier introduced Patara to the world with these words. 143 years after Texier; Prof. Dr. Fahri Işık and Prof. Dr. Havva Işık’s archeology team from Akdeniz University were the suitors to examine Patara. The excavations which began in 1988 presented us with a marvelous treasure of civilization.

Known for its heavenly beach today, Patara offers travelers the chance to walk through the gates of a magnificent capital of centuries ago. Ancient city is only 6 kilometers away once the Patara route is taken from the Fethiye-Kalkan highway.

Patara which largely falls within the borders of Antalya, brimming slightly over Muğla is the birth place of the Ancient Lycian Alliance founded in the 3rd century. The city which is the door that opens from Xanthos Valley to the sea is one of the rare Anatolian settlements that kept its name from Ancient history.

Ancient City of Patara is located east of the Eşen stream, within the borders of Gelemiş village connected to Antalya’s Kaş borough. One of the most important cities of Lycian Alliance, Patara is set on the western hill of Mount Patar, where the fertile valley of Xanthos meets the sea. The administrative capital of the Lycian Alliance has also made its place in history as Apollo’s prophecy center and the birth place of Saint Nicholas.

The historic presence of Patara, related to Apollo’s prophecy, can be seen through the accounts of the first historians Hecataeus and Heredotus. Patara was the window that connected Lukka lands mentioned in the Egyptian and Hittite texts from 2nd century BC to the rest of the world, and one of the most important ports on the trade routes that connect the Mediterranean to the Aegean. The locals of Patara named their country as “Trmis” and themselves as “Trmmili” which means Lycian.

The secret of Patara unravels a little bit more each year. Each trove carries a thousand stories, a thousand horizons… The theatre, council building, city walls, bath houses, the necropolis, the cenotaphs and Patara’s symbolic Modestus arch that the villagers call “four feet”… What made it possible to construct the region so elegantly is the port at the midst of these ruins. Patara has an unmatched geography adorned by historic masterpieces. This immortal city visited by thousands of people each year is located amongst worlds 100 monuments that are esteemed worthy of protection.

Upon entry, a three arched city gate salutes the guests. The arch gate made in the name of governor Mettius Modestus by the locals of Patara is considered Patara’s emblem with its welcoming role. The arched gate which also functions as an aqueduct is the last link of the city’s conduit system resembles a gateway that opens to history.

We know that Patara lusters as one of six cities of the Lycian Alliance together with Xanthos, Olympos, Myra and Tlos. Ruled by modern democracy praised as “the most magnificent of the ancient world” by Montesquieu; Patara was assigned the capital of Lycian Alliance. For this reason, the council, archive and the treasury was built in Patara. In the first year of the excavations in 1988, it was presumed that the ruin covered by sand and coiled plants was the council building. This majestic building defined as the meeting place of the Lycian Alliance members was unearthed by the excavations carried out during 2001-2006. The building which was restored in 2012 with the support of Grand National Assembly of Turkey is one of the most visited monuments in the area.

Right next to the council building lays the city’s theater. Since it’s mostly buried in sand, the chairman deputy of the excavation Şevket Aktaş calls Patara “The Sleeping Beauty”. The theatre with an approximate 10.000 person capacity is among the structures that sustained minimal damage due to being covered with sand. The monumental inscription on the eastern facade of the building indicates that the construction was completed in 147 AC.  This structure that witnessed gladiators and animal fights through centuries enchant us with its ahead of time architecture.

The main street stretches out in front of the theatre. Its pavements, shops and red granite columns are noble examples of Anatolia’s past. This place is also a living proof of Patara’s developed commerce.

Let’s take a convoluted footpath running through the shrubs from the main street. There’s a deep silence here, disrupted merely by the whispers of a breeze… The setting sun creates colorful abstractions in the sky, fronting the mysterious face of history. The lighthouse which was built by the Roman Emperor Neron with an original height of 26 meters had collapsed during the Rhodes earthquake in 1481. The remains of the lighthouse unearthed by the 2004 excavations await its restoration with patience.

For thousands of years, the Mediterranean has been speaking of countless emotions with the same sound in Patara. The Leto date palm orchard located right in the center of the Ancient City fascinates us with the marvels of nature. The orchard which survived many fires which was last burnt in 1991 is the apple of Patara’s eye with its green offshoots bursting through the soil.

Patara is also the place that has gifted the world with Saint Nicholas, who spread Christianity in Anatolia. A worldly saint, Saint Nicholas was born in Patara at the beginning of 4th century AC. Patara honored his memory with two basilicas, five churches and three chapels through the centuries. Patara made its place in history for the last time as “the place Cem Sultan made a treaty with the Rhodeans” in 1478-79. After this date, sand piled on the roadstead covering the land. The soil and history went into silence…

But stone doesn’t. What stone has to tell is the source of what we know about the past. So, listen to the stones: